What Service Are You Looking For

Because the perfect piece of jewelry sometimes falls outside your immediate budget, Long Jewelers provides financing through Wells Fargo.

Applying for financing takes only minutes, and Wells Fargo offers many options to meet your needs, subject to approved credit. Our convenient financing options allow you to purchase the jewelry of your dreams and pay over time. Just another reason "You Belong at Long Jewelers"!

Over 30 Years in Business

Over 30 Years in Business

Long Jewelers has a long and proud history of serving the greater Hampton-Roads community for over 30 years. Our commitment to bringing our clients the finest jewelry, diamonds and gems, as well as full services at the greatest values possible is a promise we have always maintained.

Our commitment to a highly trained staff insures that each member of the Long Jewelers “family” receives the best care and advice possible. “Putting the customer first is always our main concern”, says David Long, Owner and President.

Being locally owned and operated means that Long Jewelers has a stake in the community, supporting many local charitable efforts and causes.

Quality, value, selection and service make it easy to understand why “You Belong at Long Jewelers!”

Long Jewelers can offer exceptional diamond pricing because rather than selling you a diamond, we serve as your personal diamond broker, bringing our experience, knowledge and reputation and placing them at your service. We have been providing advice to Hampton Roads diamond clients for over 30 years.

Our standards in choosing your diamond are higher than most grading reports, ensuring that you get the best value for your money. Because we value our reputation as diamond brokers, “You Belong at Long Jewelers”!

Long Jewelers is proud to represent some of the most highly reputable jewelry companies in the industry, including; Hearts on Fire, Forevermark, Martin Flyer, Verragio and ALOR. Because of this, it is with confidence and pride that we guarantee our fine jewelry to be free of defects in material or craftsmanship. We will repair or replace any purchase found to be defective at no cost to you. This guarantee does not extend to normal wear and tear.

Having tremendous confidence in the diamonds that we provide, it is easy to reason why we can provide a lifetime diamond upgrade on our loose diamonds and diamond stud earrings.

With every purchase, we always offer free cleaning, polishing, inspection and appraisal services for your diamond purchases.

If you ever decide to upgrade your diamond or diamond studs, we will give you the full amount you paid toward another of greater value. Confidence in the value of your purchase is another reason, “You Belong at Long Jewelers”!

The news was announced at the Couture Jewelry Show in Las Vegas last month, with 160 total pieces available for lovers of the brand. 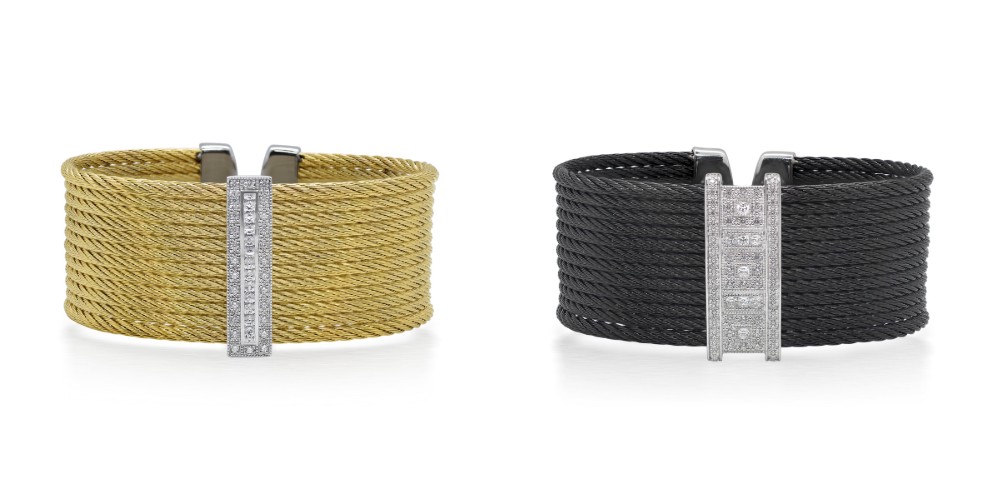 ALOR, a designer jewelry collection offered by Long Jewelers at their Virginia Beach showroom, celebrates its 40th anniversary this year.

To celebrate, the brand has released four limited edition cuff bracelet silhouettes that showcase the unmistakable looks that had shoppers buzzing from the very beginning. Only 40 of each design have been released, as a nod to ALOR’s 40 years in business, for a grand total of 160 pieces available.

In addition to the cable jewelry pieces that has become ALOR’s signature, the brand also offers 18kt gold collections, bridal jewelry, and even Swiss-made watches. Originally founded in 1979 by Sandy and Jack Zemer, the design studio is now led by their sons Ori and Tal, after whom the brand was named.

Sandy and Jack designed their jewelry’s distinctive look after realizing that the industry lacked luxury designer brands. It’s clear to see that their insight has paid off, as ALOR now celebrates four decades of success across 300 points of distribution all over the world.

The brand has a special place in the hearts of the Long Jewelers team as well, as it was the retailer’s first designer brand they added to their showroom almost 20 years ago.

“We were growing rapidly and wanted to begin bringing on designers to enhance our local appeal, but were a little concerned about the commitment as it’s almost like a marriage in a way,” said Jon Walp, the general manager of Long Jewelers. “We found that other store owners were having great success with the line so at the next JCK we approached them. It truly was like courting and took a while to ‘tie the knot,’ but it was successful enough that we began ‘courting’ other brands. The rest is history.”

To learn more about ALOR and the brand’s collections that are available at Long Jewelers, get in touch with their store by calling (757)-498-1186 or emailing info@longjewelers.com.

For over 30 years, Long Jewelers has been a retailer of designer wedding bands, engagement rings, Swiss timepieces, and fine jewelry items, and services customers in the Virginia Beach, Virginia area. Under the leadership of founder and president David Long, Long Jewelers has come to boast the largest jewelry showroom in Virginia, has been featured in magazines such as Town & Country and InStyle, and has been voted the “Best of the Beach” more than 20 times. For questions concerning products, sales, services, or onsite jewelry repair, visit Longjewelers.net or call (757)-498-1186 for more information.

get exclusive offers and news.

Don't have an account? Enter your order number and email address below to track your order.